ATUH BEACH IS ONE OF THE MOST POPULAR TOURIST DESTINATION, IT’S A HIDDEN BEACH ON THE REMOUTE SOUTH-EASTERN COAST OF NUSA PENIDA ISLAND

Atuh Beach is secluded by magnificent green cliffs, while various limestone rock formations surround it, adding to the beauty of the area. The white sand beach itself is accessible via a purpose-built stairway, or you can try the narrow tracks along a rugged cliff face if you’re feeling adventurous. The beach is great for relaxing with a spectacular view. However, the waters aren’t always swimmable. There are four main rocky outcrops and islets dotting the coast of Atuh Beach. All these contribute to the breathtaking views. Named by locals as Batu Melawang, Batu Abah, Batu Paon and Bukit Jineng, it is Bukit Jineng, also referred to as Batu Bolong or “hollow rock”, which is the most striking, thanks to its arch-like formation. 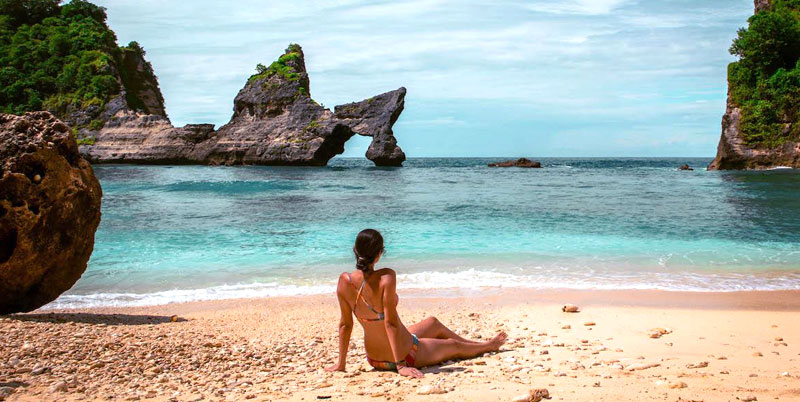 Due to its remote location, you will most likely have the beach to yourself most of your visit. Low tide often reveals rock pools where you can observe fish and marine life waiting to hitch a ride on the next tide. Swimming in the waves beyond the rock pools is not advisable and there are no lifeguards. At times, local vendors are around selling refreshments and snacks on the sand. Like most of the remote beaches on Nusa Penida island, getting to Atuh Beach is best done by motorbike. It’s about a two-hour ride from the main harbour on the island’s northwest coast. The descent to the beach itself is roughly a half-hour trek and the view is worth it, especially if you’re a beach lover.